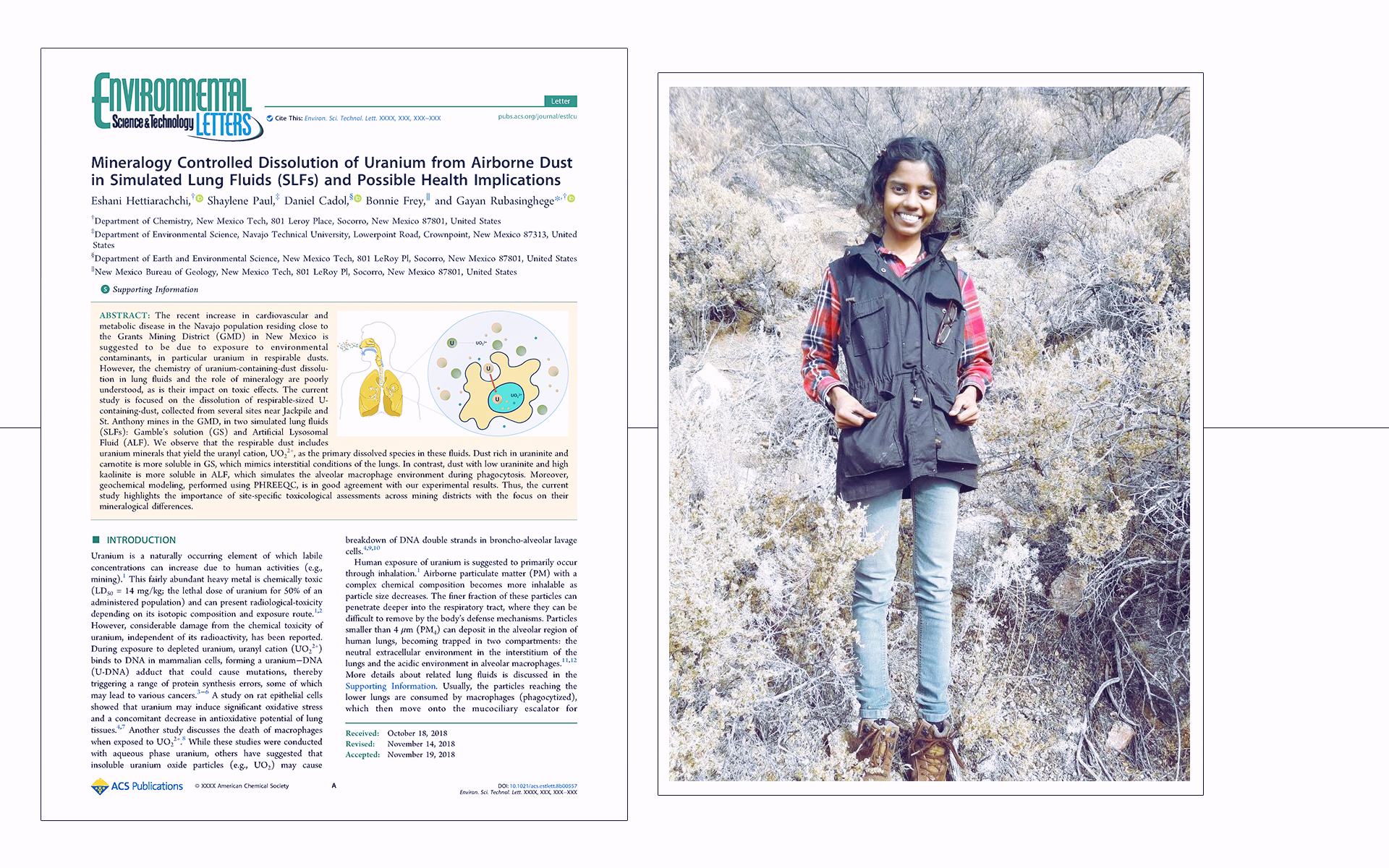 Cardiovascular and metabolic disease rates remain high among Navajo Nation residents near the many abandoned uranium mines in the Grants Mining District in western New Mexico. One explanation could be the inhalation of dust containing uranium, but little is known about how uranium interacts with the body inside the lungs—does it survive in the lungs? Does it dissolve into the bloodstream? Does it dissolve harmlessly? To find out, Eshani and her team collected dust from five different sites near the Jackpile mine and the St. Anthony mine within 1.5 miles of a local community. The dust was then characterized to identify mineral contents, and dissolved in two different fluids meant to simulate conditions inside human lungs. The team analyzed the results, looking at the chemical changes in the dust when interacting with the simulated lung fluids. Among other findings, the team discovered that uranium can be dissolved in the lungs, but the specific non-uranium mineralogy of the dust has an impact on how the fluids interacted with the uranium.

Our results suggest that uranium-bearing dust can be dissolved in interstitial lung fluids and/or during phagocytosis [when a cell internalizes or engulfs a particle], with the potential of mobile uranium compounds (primarily UO22+ ) entering the bloodstream... The extent of uranium dissolution in the two different lung fluids heavily depends on the total mineralogy of the dust itself, suggesting the strong common ion effects. In particular, the amount of uraninite has shown to increase the dissolution in the interstitial conditions of the deep lungs. This suggests that the toxicological assessments on these mining lands should be site-specific rather than applied generally.

The team concluded that overall, "dust inhalation followed by dissolution may cause adverse toxic effects due to the compositional changes (i.e., pH, speciation, and ionic strength) in the lungs. Therefore, understanding the behavior of inhaled U-containing-dust in these mining areas with the specific focus on site mineralogy is vitally important."

Congratulations to Eshani and her team for this outstanding research and contribution to furthering the understanding of uranium and its interactions with humans and the environment. View the full publication here, and the ACS press release here.